We recognize the Kona district of Hawaii, the Antigua district of Guatemala, and most recently Yirgacheffe, Harrar, and Sidamo in Ethiopia as special coffee production areas producing beans of high quality, and unique characteristics. Since the earliest days of coffee commerce there have been great coffee districts, great farms, and great farmers; folks who have stood up and stood out for the quality of their product. In the generation before the phrase “Specialty Coffee” was coined, and prior to the acknowledgement of Price Peterson’s La Esmeralda, and William McAlpin’s La Minita, there was Keble Munn’s Mavis Bank Blue Mountain Coffee of Jamaica. Keble died in April, at the age of 88. We are the smaller for his passing as his personal energy, love of coffee, and love of coffee farmers energized a singular achievement. What few know, and that which we honor, and remember today, is that it was Keble Munn’s successful fight for the Jamaica Blue Mountain district recognition that became the knowing model for all these later specialty coffee successes.

Keble Munn in an undated photograph

Jamaican Coffee culture dates to 1728, when it was first cultivated in the Blue Mountains Northeast of Kingston. Mavis Bank is a valley nestled, at 3,000 ft., between the infinitely fertile rolling peaks (which rise to 7,500 feet) amid the rainforest that provides cultivated ground, that Cecil Augustus Munn began farming coffee at “Strawberry Hill” in the 1800’s. It was at Strawberry Hill that a young Keble Munn first learned the lore and love of great coffee, and it was here that Cecil’s son Victor, Keble’s father began his mill, Mavis Bank on a five acre plot in the early 1920’s.

Keble served in the Canadian army during WWII, and on his return home was discouraged to find that the reputation of Jamaican coffee had diminished, he believed because low grown produce was being exported as Blue Mountain Coffee. He determined that to reestablish the country’s coffee reputation it was necessary to create a government delineated Blue Mountain coffee district, and that within that district only coffee grown above a certain elevation could be called Blue Mountain.

Munn entered local politics as a member of the People's National Party, in 1956, while Jamaica was still a Crown Colony. He served as a Councillor and later as Deputy Mayor of Kingston. He served as Minister of National Security and Minister of Agriculture from 1959-1962. Independence was granted to Jamaica in 1962, and Keble served as a member of the government again from 1972-1980 while also being the Leader of the House of Representatives. Munn served as a Member of Parliament from 1959-1980 as an MP from East Rural St Andrew, and later from South East St Andrew and then for Eastern St Andrew. He retired from active politics in 1980. 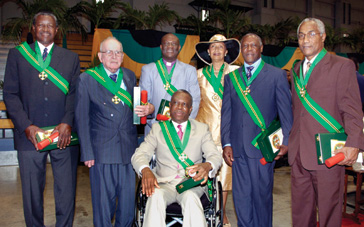 Keble Munn, second from left, on the occasion of receiving the Order of Jamaica, Nov.4, 2007

Keble’s political life was an active and controversial one. His ambitions for Blue Mountain coffee were realized, when, in 1973, by Act of Parliament only coffee grown in a specific region of the Blue Mountain range at altitude (traditionally 3,000 and 5,500 ft.) and processed by Mavis Bank and three other factories, could be legally certified as 100% Blue Mountain coffee. Munn promptly found himself under attack, for using his position, as Minister of Agriculture, to creating a monopoly to the detriment of small farmers, and to the benefit of Mavis Bank. Mr. Munn’s vision for Jamaican coffee was vindicated, for under the watchful eye of Jamaica Coffee Industry Board (the government agency founded in 1950 to regulate the nation’s coffee) the new design proved to be a guarantee for an extraordinarily high quality product. The nation’s coffee reputation was restored along with its pre-war markets, and production grew many fold providing a livelihood to many smallholders, and creating the need for additional mills that were licensed by Coffee Board for the processing of Blue Mountain coffee.

Mr. Munn’s efforts created an economic model that, in his generation, placed Blue Mountain coffee at the pinnacle of the world coffee economic ladder, and placed the small Jamaican Blue Mountain farmer among the highest earning coffee farmers in the world. Today, the Blue Mountain model continues to be one that aspiring coffee origins admire and attempt to emulate.

Keble’s life in coffee was a beacon in the generation after World War II that lit the way to the rebirth of specialty coffee in the 1970’s. His admirers in North America recognized his contribution in 2001, by honoring him as an SCAA Lifetime Achievement Laureate.

Keble Munn is survived by his wife, Yvonne, his son Gordon, and daughters Gwyneth, Leiza and Jodi.